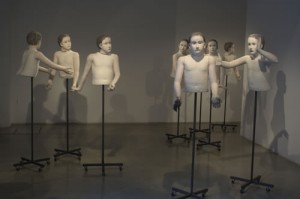 View of Elise Siegel's I am what is around me partial installation view, Nancy Margolis Gallery, 2007

To view Elise Siegel’s ceramic sculpture at the Nancy Margolis Gallery is to become an intruder, and possibly an agent of corruption. There you’ll find several small groups of Siegel’s unsmiling, nearly identical boys – upper halves only, mounted on black stands – enacting a cultish ritual or game. Interrupted, some turn to look at their visitor, while one figure, nearest the door, comes forward to present his blackened hands. Innocence fouled by an exposure to the outside, or simply a childish display of mud? The show’s title, I am what is around me (the first line of a Wallace Stevens poem), gives a hint.

Siegel, an accomplished sculptor whose work has appeared in numerous galleries and museums, combines carefully arranged theatrics with a folk art sensibility (indefinite features, rough texture) to create a scene that, like other tableaux of hers, both charms and unnerves. Realism, only a starting point here, has been disturbed and skewed into foreboding dreamscape.

The creepiness comes, in part, from Siegel’s process of golemlike creation. She molds her hollow figures whole out of clay coils, cuts them up to fit body parts into the kiln, then reassembles them— a sequence that came to her by happenstance (the kiln wasn’t large enough), but one that gives each figure a sutured-together look with visible seams (scars) along the shoulders, ribs, and wrists. What’s more, Siegel has left the heads partially severed; they rest at awkward angles, as if the boys are still learning how to use them.

Not quite human, then, the figures perch on their black stands like large puppets. Manipulated by Siegel’s sure sense of stagecraft, they ask us, in turn, to respond—but it’s not clear how. The provocative and somewhat chilling enigma of those beseeching hands leaves us feeling a little helpless.