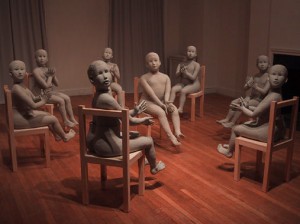 View of Elise Siegel's Into the room of dream/dread, I abrupt awake clapping, ceramic and mixed mediums, 2001; at Jane Hartsook.

Elise Siegel’s grouping of eight nearly identical child-sized ceramic figures was installed in a heavily curtained and dimly lit upstairs gallery at the Greenwich House Pottery. Nonspecific in gender, all the figures sat on hardwood school chairs, their feet dangling. Seven of the eight were arrayed in a circle around the final member, and every one of them looked you right in the eye as you entered the room. With their hands held in front of their chests, silently clapping— mouths slightly ajar and heads tilted at a variety of inquisitive angles, this little kindergarten group positively radiate expectancy and dread. Whatever the game, the figure in the center was “it” —with hands in lap, not clapping. Whether you, the viewer, came to judge, to supervise or to perform was not clear, but you were immediately the center of attention. This strange reversal of focus, together with the eerie silence of their arrested clapping, delivered an almost physical blow to the viewer entering the room for the first time. The piece is titled Into the room of dream/dread, I abrupt awake clapping. The details of Siegel’s manipulation of this little drama are fascinating. The figures are modeled as big hand-built pots, like early pre-Columbian figurines. The volumes are fat and doughy, acquiring a slightly higher level of articulation at the extremities. The feet are particularly detailed, with their curled toes and arched insteps anxiously paddling the empty air. The faces all have simple punched-in eyes, remarkably penetrating despite their crudity of facture. The heads were fired separately from the bodies and sit precariously on small clay wedges that allow the sculptor to rotate and tilt each head until its gaze is perfectly fixed on the entrance. A second division at each figure’s waist contributes to this flexibility. Such minor misalignments of head and body help to increase the feeling of fragility without breaking the dramatic illusion — no mean trick. Everything is colored a dull, even gray, like unfired clay. As is often the case with sculptures of children, there is a sliding sense of scale, so that one isn’t exactly clear what age the figures are meant to be or even how big they are. Such ambiguities contribute to that simultaneously vague and acute wash of sensation characteristic of dreams, particularly those startling, waking dreams in which we are both participant and observer, inside our identity, yet outside of it, until we awake overwhelmed by the momentary unreality of the familiar quotidian world. [The work is on view at the Zilkha Gallery, Wesleyan University, through Dec. 9.]